Love! Thy shade is bliss. 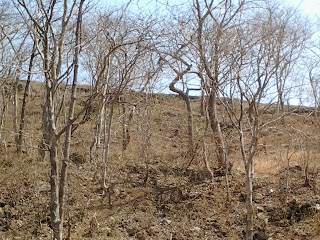 I was travelling by LTT – RJPB Express from Mumbai to Patna. The train had just left Jabalpur station and was cruising slowly over the tracks. It was May and at around 4:30 PM there was scorching heat outside. I was sitting in the AC 2 Compartment at one of the side lower seats and was looking outside.

There was a raised flat platform just besides the track beyond the boundaries of the railway station. A banyan tree near that platform was showering its bliss as soothing shelter to the platform. On that platform sat two couples.

I saw them and kept looking at them. When the train gained speed I went over to the gate of the boggy, opened it and leaned over.

They were two old malnourished beggars wearing their dirty and torn clothes.

“Did I say old? How could I be so sure? Poverty brings age much earlier than destined.”

The woman was giving massage on the right leg of her man and her man was gently massaging her hand moving over his leg. They were whispering among themselves.

“Are you feeling comfortable now?” I guessed them asking one another.

The Sun stood shy and the heat stupefied. I came back to my seat feeling warm in the air conditioned boggy.

I am asking myself “Is love all about you and I or is it all about We?”

Life is all about 'we' but sometimes we learn some good lessons at unknown places and from strangers!

Thanks Deepa for dropping by my write.

A Little introspection, most of the good lessons I learnt are from strangers, just by observing and then contemplating.

Thanks for your read.

Thats being together in difficult times. We giving strength
Regards
Tina

It makes a lot of difference !!

Thanks Tina for your read and appreciation.

wkwardearthling ! Yes it makes all the difference.

Thanks for dropping by.

Life itself is strange.

When two souls care for each other and live the life together in worst possible circumstances, then I believe there is no I or You that matters. Its always about "we". :)

Thanks Saumy for your read

Irony is we understand that it is all about We but we practice I or you.

Interesting observations. I like looking at people and imagining their lives and conversations too!

That is great to know that you too observe and imagine.

Thanks a lot for your read and appreciation